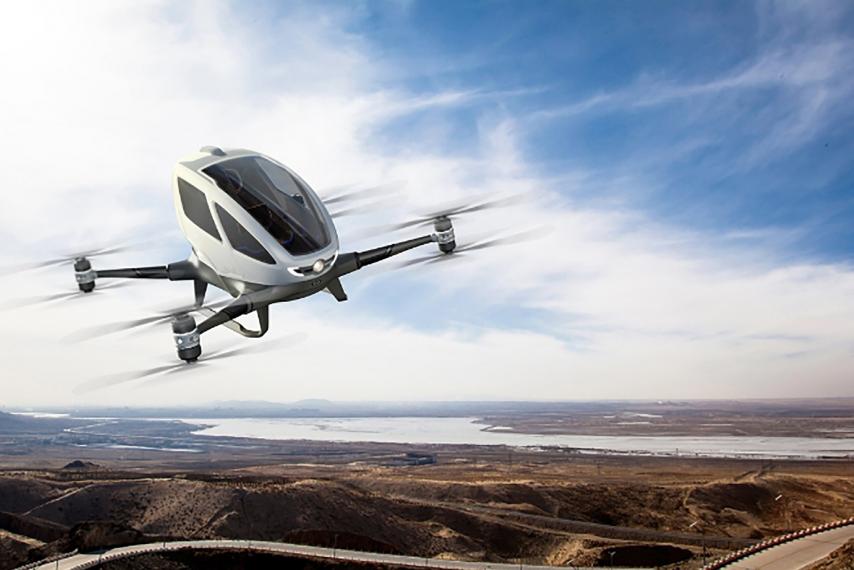 The drones are a very popular flying machine. It is used to take photos, videos and more risky tasks. Apart from that, there is a Chinese company that has created human-carrying drone. They renamed it as drone 184. It can fly one passenger in the sky for 23 minutes. There are many casual drones which are used by a person to take some awesome videos for the movies. You shall love to watch those shots live from the sky.

What is the first human-carrying drone?

Ehang, a Chinese drone maker company has finally invented 184 which is also known as human carrying drone. It was a prototype that can be used to fly human in the sky. It looks like helicopter although the form factor is much smaller than the actual helicopter. There are four handles along with four upward facing propellers and four downwards facing propellers. There are two buttons one for take-off another for landing.

On the first look you may be confused with the helicopter as soon as you look into the propellers then you shall know that it is not a helicopter. There are eight powerful propellers that can make you fly. These propellers are parallel to the ground just like a normal drone. It takes few hours to recharge the drone completely. The best part is that it can carry 220 pounds for 23 minutes without any problem.

How is the cabin for the passenger in the human-carrying drone?

When it comes to the cabin for the passenger, it is pretty big for one person. The best part is that it is air conditioned so you can enjoy the view while flying. There are a reading LED lights that shine brighter than your thoughts. After you set up in the cabin you have only two options one is take-off another is landing. If you are going to fly, then you should press the take-off button.

What are the other inventions?

There is another drone named, volocopter. It is pretty popular because it has brought many features in a single place. The best part is that you don’t need any flying helicopter if you want to enjoy the casual flight. It will work as a flying car that can take you from point A to point B without any break. It is the future of the drones by which you can test the sky for a while.

There are 18 rotors that can provide you with an awesome view of the sky. There are some backup system/propellers that will come into action as soon as system failures. You don’t have to worry about the safety of the done because it is very safe for you. You may use it as a car, but you don’t have to drive on the ground.

What is the innovative idea of the volocopter?

The volocopter is one of the amazing machines that can bring joy to your daily life. It comes with two seated design so you can carry one of your friends to explore the area. The battery packs are hidden beneath the seats, so there are plenty of spaces for you. The best part is that it can fly up to 30 minutes without any break. It is certified for sport flying and casual outing.

You have to pay around 340,000 dollars if you want to buy one of the volocopter. Zosel is working to extend the flying time to one hour with some modifications. It can change your life because you don’t have to wait anymore to reach your destination. It is the best way for transportation. The drone is very powerful considering the carriage.

The human-carrying drone is tested for several times with a passenger inside so you don’t have to worry about the carriage. You don’t have to learn how to fly the drone because it is pre-programmed. The company is looking for buyers of the project. It will help the company to increase the safety of the drone. There are many propellers that can make you fly without any warnings.

What is the exciting fact about the 184?

The 184 is the first autonomous drone that can fly humans without any problems. There is one seat for passenger although there is no seat for the pilot. It is preprogrammed for flying, so there is no need for a pilot in the human carrying drone. You don’t have to operate the remote, unlike the normal drones. All you need to plan the destinations by touching the points on the map. The drone will take you to that point.

The 184 human flying drones are very exciting because there are four arms along with eight propellers. There were some issues with the government that is why it cannot be fly earlier. The issues need to be solved before it begins to fly again. There are LED lights in the arms that will light up so you can recognise the functions of the flying drone taxis properly.

What is special about the human-carrying drone?

There are many human carrying drones innovated by different companies. The 184 is pretty popular because of the small form factors and large flying time. You can enjoy the stunning views from the sky. You have to charge it properly to fly it frequently. It also comes with interchangeable batteries so you can have the best feelings. It was revealed at the consumer electronics show in Las Vegas.

The Nevada Institute has permitted the autonomous drone to fly for testing purpose. Ehang had submitted the results and key findings from the test to the federal aviation administration. However, it was not clear in the test that whether it can fly passengers or not.  Later the doubts were cleared out by the authority. There is no need of runway unlike the aeroplanes because it can land like the helicopter. 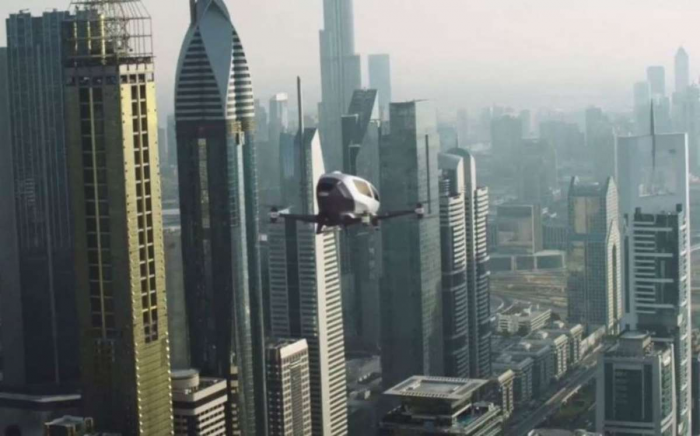 What are the numbers in the speedometer?

It is quite exciting to see the numbers indicated in the speedometer of the human carrying drone. The 184 drone can go quite fast at 62 miles per hour in an open space. The best part is that there is a height indicator that can be used to track the flying height. It can go up to 11,500 feet above sea level in the air. There is enough juice that can lead you towards 23 minutes of flying time.

What are the restrictions?

There are many problems of flying drones in the city. There are many courtiers where you cannot fly drones. You need to have permission from the authority to fly a drone in open space. In the case of human carrying drone, the same applies here. These drones are not permitted to fly over the people. However, FAA is looking for some solution to clear out the restrictions to use fly a drone for commercial use.

There are many rules that minimise the potential injuries during flying. If you want to fly in the sky, then you have to understand the system of the human carrying drone. The automated system can carry you from point A to point B, so you don’t need any manual control. There are many drones that weight less than 55 pounds that come with a remote. There are additional rules for the human carrying drones.

Why is it safer than any other vehicles?

Ehang has promised that it will deliver a better experience when it comes to transportation. It is quite better than the driving because there are no controls. The best part is that you shall never be late in the destination because there is no traffic. There are many people who have estimated the cost of the human carrying drone. You shall have the following benefits of having a drone.

The makers of 184 have announced that there are testing processes in the state of Nevada. It is in the testing process, and the key findings will be used for developments. It is the big steps before it goes into public. There is an event for a malfunction that shows the nearest available area for the landing. It is a working prototype that is why it is known as an autonomous craft for many people.

Which is the best human-carrying drone?

If you are looking for the best drone that can carry human, then 184 by Ehang is the best. It is completely based on an automatic system that is why anyone can ride it as a passenger. There is a screen that will show you important information regarding the navigation route. In the future, it will be approved by the authority so you can fly it to explore the world.

What is the cost of the drones?

The cost of the drone is pretty interesting; it takes around 200,000 dollars to 300,000 dollars to sell the drone in public market. There is each and every protection that will prevent you from falling whenever the machine goes into a problem. There are backup propellers that will come into action. The digital display will show you everything which is necessary for the drone.

It is pre-planned to fly at low altitude, so there will be no injury if anything goes wrong. Ehang also told that it would take some time before it goes into sale in the public market because of the evolving designs. You can enjoy the pleasant air-conditioning even in the hot atmosphere just like the normal car.  There are many people who have to find out drawbacks of the drones.

Ehang is working hard to fix those problems. They have introduced the voice guided system in the drone so you can start it by just saying ‘start’. They have told that it can be fully automated and voice operated. You can fly and land by saying ‘take-off’ and ‘land’ respectively inside the car.  It is powerful enough to carry a person from one place to another place while keeping the safety equipment.

What are the differences between the helicopter and human carrying drones?

It may sound like a helicopter, but there are many differences whenever you look properly. There are four arms along with eight propellers which are missing in the helicopter. The propellers can spin parallel to the ground to flow the air downwards; it will help the drone to generate enough power to carry a human along with the drone. It was revealed at the consumer electronics show in Las Vegas that is why it is very popular.

There are many fake videos that show drones can fly human in YouTube. People are waiting for something like that. The regular sized drone can make a significant difference when it is in a bigger size with powers. There was a rumour about the human-carrying drone that is why when it Ehang unveiled the 184 it spreads like a fire in the world.

One thought on “Why is the human-carrying drone considered as the best innovation?”